CPTR is in accord with the basic rules of economics. Adam Smith’s so-called “canons of taxation” are a good jumping-off point for a fundamental understanding of taxation, whether that tax is progressive or conservative.

As untrammeled monopolies gain more power in the post-political age, tax burdens inexorably are shifting to what we used to call the middle and working classes. Even the indigent are on the hook for day-to-day transactional taxes. Why that is requires copious explanation, but from this corner’s perspective, it is, in brief, because the social consensus of conscientious regulation, tax policy, and a transparent legal environment lies in tatters. A doable turnaround requires fairness, above all.

Gross receipt taxes (GRT) are bad for consumers and bad for some businesses. The pyramiding characteristics of a GRT distort the actual tax rate, unfairly impacting some products and industries more than others. In addition, with a GRT, many products can be taxed multiple times before they reach the final consumer, resulting in higher prices on such critical items as food and clothing. This is dangerously simililar to VAT (value-added tax).

Crudely this is how it works

In a gross receipts regime, the producer makes a widget, collects a percentage of the sale, and sends the GRT to the city, county, or state government. In each following step, from wholesale and retail, to the consumer, the same GRT tax rate is applied to each subsequent transaction. 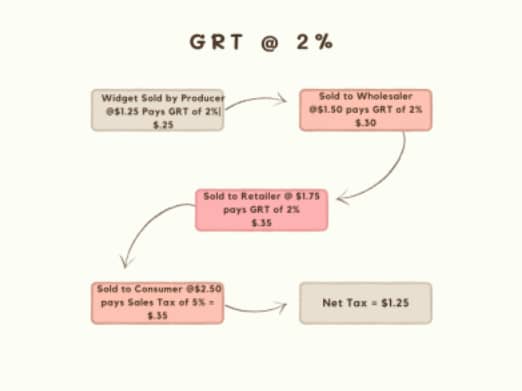 GRT is cumbersome and regressive. And yet decades after it was first tried during the Depression, it’s getting a second chance. This is despite empirical studies demonstrating that this levy can hurt low-profit-margin businesses and new businesses.

An early analyst of US tax policies, Edwin R. A. Seligman observed:

A tax on gross receipts is like the tithe: gross receipts are no indication of the real profitable nests of the business. Taxes on outputs or gross receipts which make no allowance for the expenses constitute a rough and ready system, suitable only for the more primitive stages of economic life.

If we want to encourage a new economy, penalizing businesses with a tax on gross receipts (sometimes for years without profit) makes little sense. If minority-owned businesses that can barely scrape up investment capital have to remit a generous portion of their receipts to the tax collector, that gives big corporations an unfair advantage. The net receipts tax, at least, considers the cost and other inputs necessary to run the business.

Also, a GRT consigns certain geographic areas (looking at you, Philadelphia!) to a built-in lack of competitive edge even with a modest threshold, incubator, and tax credit programs. The victims of this logical disconnect will disproportionately comprise strivers, immigrants, people of color, and all the others.

All those who want to join in a producing prosperous society and healthy economic future for today’s communities , as well as for coming generations, require a more straightforward and more just taxation system. Getting rid of the GRT would be an important and encouraging first step.

Working Towards a Progressive Property Tax 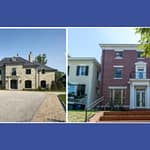 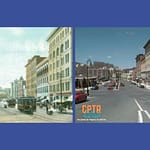 Mass MoCA: When Does Public Investment Pay Off?
Scroll to top