This year, New York City is going to try and recover from the atrocity that was 2020. It’s going to be a lot harder than people think. Many high-end taxpayers won’t be there.

The go-go economy is gone, gone. New York has transformed itself into a finance center in the past generation rather than a whole city. Michael Bloomberg’s legacy was upzoning, transforming working-class and struggling neighborhoods into a monoculture of craft beards, precious farmers’ markets, and tweed [I meant “twee” like too cutesy] flannel shirts.

New York became the city dedicated to serving the rentier class whose activities, in the name of the “free market,” led to the near extermination of actual free markets, putting workers and productive businesses under crushing weights. Unearned income became the ideal; Bloomberg used the power of zoning and sweetheart tax abatements to help his friends throw flimsy towers into the sky that nobody could afford except foreign absconders.

Those who benefited the most from the idea of “New York City” are steadily reacting to the Covid economy by pulling up stakes, putting paid to the notion of “Hey, we are all in this together.” Those moving are also taking the wages, retail, and businesses that pay for New York City’s revenue needs.

That leaves millions of people left behind who don’t have the means or the desire to leave their long-term neighborhoods in the five boroughs. These are the millions that love where they are and have an investment in their city streets, children, and future. This year, New York seems to be bypassing the usual and looking earnestly at assertive new voices running for Mayor, City Council, and the New York State Legislature – all in an effort to break the logjam of same-old-same-old.

A new addition to the race is New York native Andrew Yang.  Yang first came to national attention in 2016 during his quixotic run for the Democratic Presidential nomination by proposing a universal basic income (UBI). Yang offered that $1 billion a year should go to New York City’s most at-risk 500,000 people. It certainly seems a nice thing to do.

New York’s candidates in 2021 discuss new ideas and new strategies to return the city to its “All Access” roots. UBI is a welcome addition to the conversation pit. Those influenced by classical economics and reject neoliberalism see danger looming in this altruistic idea.

Question: What will landowners and landlords do when defenseless tenants get this pot of cash meant to help the struggling?

Answer: They will take it in the form of higher rents.

An anti-UBI piece  from  the reliably center-right City Journal notes:

“Landlords of housed recipients of basic income will feel free to raise rents a proportionate amount, meaning that the program will be something of a wash for those tenants and would actually make life harder for households not getting basic income.”

Well, yeah. New Yorkers generally don’t have to deal with kindhearted landlords working in a slim margin environment. Instead, they are confronted by landlords snagging every pretty penny.

A person’s UBI disappearing into someone else’s pockets is a real and often realized risk. On the revenue side, UBI proponents see only sunshine. We will get the money for UBI from other taxes, charitable not-for-profit foundations, and donations. Every one of those sources can be transitory or will distort the working economy.

The most direct cause and effect way to ensure that those who get the UBI keep it is to short-stop the landlords at the get go: collect the economic rent of land directly from them. This means that UBI surplus goes into the community’s hands.

Even in New York City, during Covid, rents have started to fall, particularly in Manhattan. Ironically, the cheaper boroughs can still command high rents. Indeed, the only way to make UBI a benefit is to strip the unearned benefits from the lords of the land. 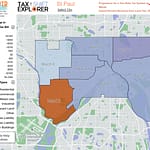 Shifting Taxes in the Twin Cities
Scroll to top