Also: should everyone have their own trauma score?

Here’s where you can learn more about the people and ideas in this episode:

The post Is It Wrong to Crave Praise? (NSQ Ep. 23) appeared first on Freakonomics.

“I Am Interested in Lots of Things, and That’s Actually a Bad Strategy”... 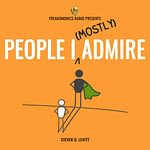 Parsing the Fed: How the November Statement Changed From September
Scroll to top