Something odd happened to me this morning. Sitting next to an open window in my house trying to do some work and writing, I sat back and heard: nothing.

Living in a commuter community across from the great city of Philadelphia, Monday mornings are usually less intensive with activity than in the bigger cities, but there is noticeable activity nevertheless. About 600 planes fly in and out of PHL daily, most of them flying about 4,000 feet above my town. Today and for the last few weeks there has been a drastic reduction in air traffic with about 40% of all departures canceled.[1]

One of the infrastructure amenities that benefits Philadelphia is a commuter train (PATCO) that, in usual times, runs every ten minutes through my town into the city (and vice versa).  After years of acclimation to the nearby shriek and hiss of the trains, again it’s now  noticeable when I hear the train break as it enters the station; otherwise, I hear nothing.

On most days in our neighborhood,  during the day, contractors, and tree surgeons populate what is an aging stock of houses and businesses. The sound of machinery started at 8 AM and ended at sunset. Now: nothing.

Anecdotally and empirically, 21st-century economies are declining at an unheard-of pace. These are not usual times. An economist at the St. Louis Fed believes that the generally accepted number of people that will be unemployed because of social distancing, business closures, geographic dislocation, and illness will climb from 5.6 million to about 52.8 million, or nearly 32% of the US workforce.[2] Yes, this takes us back to 1933, but with another 10% added.

Our society is currently confronting a crisis that neither its  general population nor its governments expected or could have conceived. Adopting emergency steps to maintain public health, public sanity, and above all, confidence requires money.

Finding this money (and not printing it) is paramount. Like many organizations working with and for government, CPTR realizes that old habits die hard. For many decades fiscal policymakers have depended upon the adage of “the three-legged stool.”   The phrase is meant to assure citizens that a balanced system of revenue sources is one comprised of property, sales, and income taxes. Ironically, “the three-legged stool”( 3LS) is also a legacy of  1950s investment/retirement advice. Fortunately,  your financial adviser has probably jettisoned that lazy phrase and practice[3].

Suddenly taken away from  us in weeks, the revenue sources to which 3LS refers now needs a rethink and a retooling NOW.

During recessionary times there is a well-established pattern of revenues falling (at all sub-national levels of government). Income taxes tend to fall first, then sales taxes as wages are no longer earned, and then corporate income taxes as orders and purchases decline[4]. In this regard, economic events are developing much faster with COVID-19.

Particularly hard-hit New York State faces a  possible revenue shortfall of anywhere from $4 to $7 billion this fiscal year[5]. This number is so high because State Comptroller Thomas DiNapoli is facing a moving target, corporate tax revenues from Wall Street, which affect not only the fiscal bottom line but countless pension funds depending on good returns from the Stock Market. Also vital to New York State receipts are  the bonuses annually given to well-performing managers. Likewise, New York City Comptroller Scott Stringer’s office has revised tax revenue loss from $3.2 billion (early March 2020) to anywhere from $5  to $6 billion (in late March 2020).[6]

Lean government advocates might find this to be a silver lining, but the human trauma will not be limited to physical illness caused by COVID-19.  In large US cities, the departure of the middle class during the past decades has resumed since the end of the great recession[7]. The number of service jobs, from restaurants to construction, is evaporating. When will the workers who formerly held these jobs find new employment? How will they pay their bills? Where will they find food? How can our country’s noble, eternal instinct to help and rebuild swing into action?

The role of government, particularly state and local government, must expand and quickly. One inescapable conclusion, again referring to the old adage about revenues, is that two legs of the 3LS snapped, at least for the near term.

We know it’s inevitable, because of the history of cyclical economic downturns[8]; that societies crater and then struggle back to on their feet, at the same time they continue to leave the least of us behind.

Yet, compare this emergency to “surprises” from pandemics past[9] (including the several archaic variations of globalization by which diseases across the seas and Silk Roads hitched a ride)[10]. Trade collapse, societal safety compromised, and social cohesion threatened are again all the trademark hallmarks of global illness; and, now, that dreaded word “authority” is back. Police breaking up back-yard play by the kiddies up to minority transit riders bullied for failing to keep up with the ever changing “rules” of COVID-19.

In 2014, The IZA Journal of Labor Policy posed a question after the recession of 2008 ended: do broad-based (and progressive) forms of taxation exacerbate revenue collapse[11]? A fascinating table from the paper appears to confirm that the broad-based feature of most state (and local) taxes complicate revenue collection and, thereby, stability[12]

State and local governments are primarily handling this crisis. It does not occur to many that state and local governments raise about $2.8 trillion a year from taxation[13], which is respectably close to Federal tax revenues of $3.4 trillion (which includes the payroll tax)[14]. Of course, theory tells us that a tax on land rent is the most stable. For the moment, however, sensible and reliable tax policy can be anchored by sub-national governments, all the while reforming tax regimes so as to favor the real property tax.

Perhaps then we can, at last, rid ourselves of a wobbly three-legged stool and just sit stable and comfortable on a stout stump rooted firmly in the ground.

Everybody works but the vacant lot. 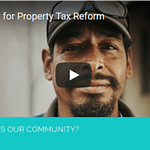 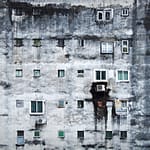